A great memoir of college student-teaching, so proud of all this girl has overcome to touch the next generation. Excellent definition of a balanced teacher and classroom! 🙂 Love her! ❤

“A good teacher is like a candle- it consumes itself to light the way for others.”

Today I ended a long, wonderful journey of seeing God’s redemptive plan on a daily basis. The experience was phenomenal. In my opinion, clinical practice as an education major at Bob Jones University is worth the $65,000 dollar education. Walking across the stage in two days seems so minute compared to the life-to-life connections and relationship experiences that I have encountered over the past four years, but more specifically in the last four months. Teaching in a public school in Greer, South Carolina has taught me a plethora of lessons, which I will try to abbreviate. 🙂

Do you like to hike? I didn’t grow up doing a lot of hiking, but I have gone on the occasional hike at camp. I also went on what I would call a monster hike on the island of Vanuatu (off the coast of Australia) when I went there on a missions trip in 2013.

This hike in Vanuatu was very strenuous…to understate it! The missionary that we went to visit actually handpicked the people from our church group that he “allowed” to go on the hike to a certain village—it was that dangerous! I remember sitting in the little hut surrounded by natives while the missionary called off names of who would accompany him overnight farther into the bush to a new village. He called off several men, then paused and told us that only two ladies would be able to go—two that he had watched all week so far and thought could do it. I am not a big hiker, and was in no way expecting to go…but he named my name as one who could go. I was actually really scared…the whole trip was a little out of my comfort zone (sleeping in the jungle, no water/hot showers, weird food, bugs!) but when I realized I would go on a hike, of all things, that a very fit missionary considered strenuous…I thought this is the end! I’m going to die in Vanuatu! 😉

We started off to cross several mountains to get to the village. I have never pushed my body to the limit it was pushed on that hike. I doubt I ever will again! One of the men in our group was a former marine (former as in last year!) and now working with law enforcement, and he was even struggling. One of the mountains was a never-ending straight-up ascent. It was not like rock climbing with ropes and harnesses, but several times I was clinging onto roots in the dirt and looking behind me at a gorgeous vista of jungle…and hoping I didn’t fall off! We were all in a line and the pressure was on to keep going. Somehow…someway…I didn’t stop, my heart was pounding out of my chest, and I made it to the top of the mountain. (I have to say, my writing cannot do the hike justice. Simply typing “I made it to the top” makes me itch for better words to describe the agonizing STRUGGLE it was to get to the top! I labored to the top…sweated to the top…the thesaurus does not have an adequate word for it! 😉 OH! And did I mention, I was carrying a backpack that weighed 30 pounds the whole time? That is like…a third of my weight!!!)

Standing, finally, on top of the mountain, I was able to stop, and just stand bent over for what felt like an eternity to get my heart rate back to normal and catch my breath. The others were the same…thankfully at the top there was a little grassy area where we all slumped and dumped our backpacks. I was drenched in sweat. The hot water in my water bottle stuffed in my backpack felt like the best water I had ever tasted. Those of you who enjoy hiking probably know what I’m going to say next— the views kind of make it worth it! I have never seen such beauty before in my life. Green, exotic, un-modernized jungle countryside stretched out forever. The missionary pointed to where you could just barely see the clear blue Pacific Ocean, as well as a distant river that we had passed hours before getting to the mountain. I felt as if I were on top of the world, and the world as I knew it was far away. And I wanted to stay. I wanted to build a house right there and never leave.

I could go on and on about Vanuatu, but the point of this story has to do with an article I read the other day about “Where to go when you’ve reached your limit.” (http://lovingchristministries.com/4-places-to-go-when-youve-hit-your-limit/)  It’s a post for moms, and the point was that sometimes everything in your life just gets so overwhelming and you have reached your limit, and you need to go away and essentially regroup. The author suggested four places…take a walk, lock yourself in the bathroom, go for a drive, or go shopping by yourself. Very practical advice! Because Jesus Himself “got away” to a mountain to pray alone. And at the end of her article she made a statement that stuck out to me…

No matter which ‘mountain’ you go to to pray, remember you do have to come down again. Your alone time helps you center, refresh, renew. Schedule it, keep the appointments, use the time to enjoy being with yourself, and then come back ‘down’ and keep working to make the earth His kingdom.

And I realized much of my struggles in life can be because I don’t want to come down off the mountain. I worry about the valleys…I worry about climbing back UP the mountain once I’m off it! 🙂 When I was hiking in Vanuatu, I had reached my limit getting to the top of that one mountain. I had reached beyond what I thought my limit was! And I needed to take that break, sit in the comfy grass, take in the view, and drink some water. But the truth is, as much as it was incredible and I wanted to stay, we had to keep going. We had more mountains to cross, and a village of people waiting for us. And what an experience that was! I was the first white girl with dark hair that the villagers had ever seen. They kept coming right up to me and touching my hair!! I was a little freaked out. And then we all met in the thatched-roof little church hut, and we sang hymns…hymns like straight out of our padded pews, sound-system, modernized church! They sang in their language and we sang in ours, and I realized we are one big family. It was an awesome opportunity and experience. But I had to come down the mountain to experience it.

I need the mountains in my life for after I’ve reached my limit of climbing.

I need to spend that time alone with God.

I need to spend the time alone hiding behind our big bed and sneaking M&Ms while Kali reads her books in the other room. (I hide because if she so much as hears the wrapper rattle she will be booking it over to my room to check out the suspicious noise and ask what I’m eating! Haha)

But I have to come down. Jesus came down. Life isn’t lived on the mountaintops—it’s lived in the valleys and crossing the rivers and being with other people who are different from you.

Don’t be afraid to leave the mountain, and experience God’s greatness in the valley. Hope you found some encouragement from this today like I did. 🙂

P.S…I have SO many stories from Vanuatu…I might start sharing them on here soon! Such an amazing experience…if you have never gone on a missions trip, sign up! 🙂 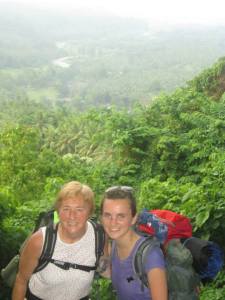 trying to get some of the scenery in the background! 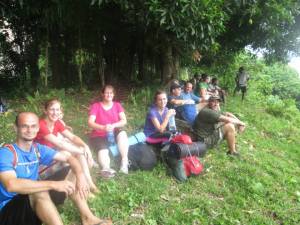 This is the grassy top of the mountain that I mentioned…we needed the break! 🙂

I am a wife to the man of my dreams Abe Phillips, step-mom to our adorable princess Kali Nicole, musician and teacher, and follower of Jesus Christ. I'm new at the blogging thing so thanks for looking at it!

A daily selection of the best content published on WordPress, collected for you by humans who love to read.

Charlie as a BSM Intern

Here I will be updating Monthly on how I am doing

blacklevelphotography.wordpress.com/
Does this Blog make me look Fat?

An honest look at life.

Encouragement for Women in Ministry

"...to give unto them beauty for ashes, the oil of joy for mourning, the garment of praise for the spirit of heaviness; that they might be called trees of righteousness, the planting of the LORD, that he might be glorified." Isaiah 61:3

Come and see what's happening in our kitchen!

thoughts from the end of the dock

“When you see someone putting on his Big Boots, you can be pretty sure that an Adventure is going to happen.” ~ Winnie the Pooh

The juggling act that is my life...